I hadn’t seen a snake all week and my arms were itching. It was high time to go herping. Sadly, nobody was free to herp with me. So I decided to go solo. On the bus to Lower Peirce , it dawned on me that it was my first time going to the Central Catchment Nature Reserve by myself.

As I walked in, I texted the group that I was in Lower Peirce. They bade me good luck and told me to call them down if I saw something cool. And I reassured them that I would.

It was an interesting experience, to say the least. Since it was a Tuesday afternoon, there was literally nobody at the reserve. The canopy cover provided much needed respite from the blazing afternoon sun. There was a good wind blowing across the water. I was also happy to see that there was nobody releasing animals into the reservoir!

As I ventured in, I heard several sounds. A Woodpecker pecking on wood in the distance, a Greater Racket Tailed D 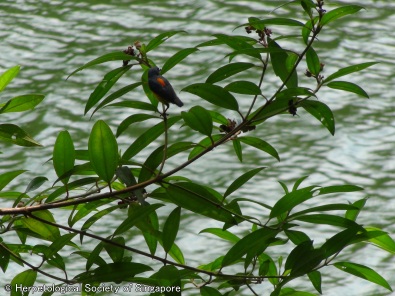 rongo (Dicrurus paradiseus) making a metallic call and a Plantain Squirrel (Callosciurus notatus) squeaking nearby. Usually, the starting area is a great place to find Black-bearded Flying Lizards (Draco melanopogon). Sadly, I saw none. I did, however, see several birds, including an Orange Bellied Flowerpecker (Dicaeum trigonostigma) eating the fruits of the Senduduk (Melastoma malabathricum) and a Drongo bathing in the reservoir. 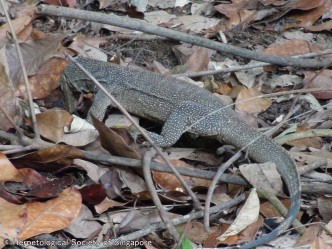 Monitor Lizard (Varanus nebulosus). It was foraging, flicking out its tongue and digging around in the leaf litter in search of food. It seemed not to mind my presence and went about its business.

As I headed on, I met a jogger. I asked him if he had seen anything. He told me that there was a group of Wild Boars (Sus scrofa) up ahead. I took my time to walk up to the end of 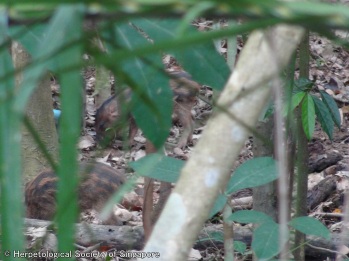 the trail. Sure enough, a large family of Wild Boars were wandering around. The mother was followed closely by her piglets, which resemble brown watermelons.

I reached the end of the trail, disappointed at the low herp count. I was about to head off, when I was hit by a craving for Teh Tarik. I decided to turn around and head to the prata shop at the other side. I had barely taken 3 steps in the other direction, when I was greeted with this sight. 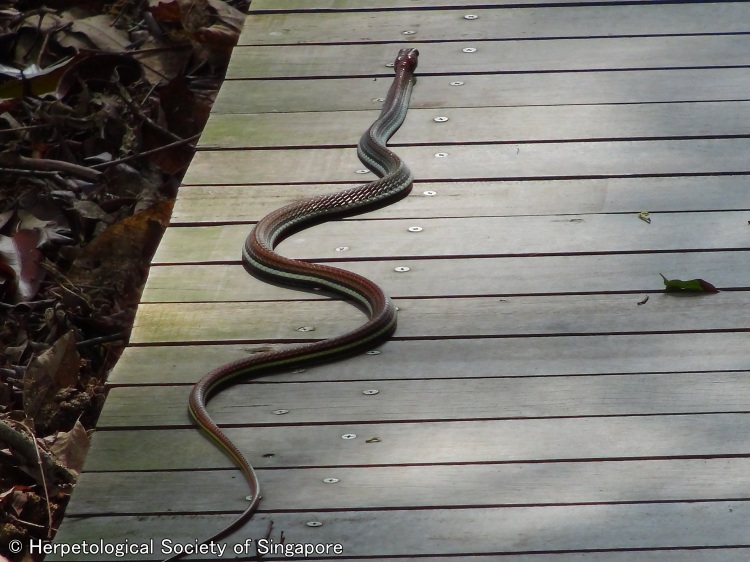 A large Striped Bronzeback (Dendrelaphis caudolineatus) had slithered up onto the boardwalk behind me to bask in the sun. It was interesting to see the flattening of the body to increase the exposed surface area. This harmless snake generally eats frogs and lizards. This snake is distinguished from other bronzebacks by the thin black stripes on its body. The dorsal scales are reddish-brown. Interestingly, this bronzeback has a very weak eyestripe, which can be found in most of the other bronzebacks.

As I approached it, the snake slithered away into the undergrowth and climbed up into the trees, out of sight. Satisfied, I rushed to the prata shop (it was threatening to rain) to get some well deserved teh tarik.