The HSS is currently developing a Lower Peirce Guided Walk to

open to the public. To plan a proper route and to identify key checkpoints, we organised a recce trip to the Lower Peirce Boardwalk on the 24th of May.

Jonathan Tan (JT) from Youth for Ecology expressed interest in joining us  for this walk, so we invited him along too! So, JT, Almira, Ing Sind and I met up at Casuarina Curry to have the obligatory teh tarik (just for luck). Once that was settled, we set off onto the boardwalk.

Almost immediately, Jonathan spotted the first herp of the day. It was a Black-bearde 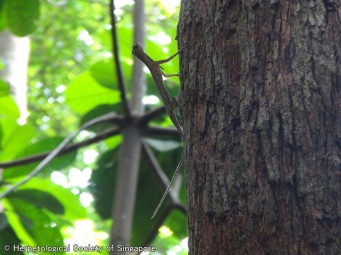 d Gliding Lizard (Draco melanopogon). JT saw it glide right in front of him, after which it scurried up the tree. This was JT’s first time seeing a Gliding Lizard. Congratulations! On the picture on the left, see if you can spot the long dewlap that gives the Black-bearded Gliding Lizard its name.

Psyched up by the early herp appearance, we walked on. There was a section of the boardwalk that ran parallel to a stream. As we looked down, we didn’t re

ally see anything. Suddenly, a splashing sound was heard from the stream. “OH!”, JT and Ing Sind shouted at the same time.

And then we saw what they were pointing at. The endangered Malayan Brown Snake¹ (Xenelaphis hexagonotus). It had adopted its signature ‘tripod’ pose, with the head and neck sticking out of the water’s surface. This is the typical position that the Malayan Brown Snake adopts while hunting prey (usually fish and small frogs). The snake then proceeded to patrol the stream, presumably searching for food.

We informed the rest of the team about the snake. Serin

got so excited, he took a taxi all the way from Tampines to see this snake! That’s dedication. Half an hour later, we saw him lumbering down the boardwalk, covered in sweat. Happily, the snake was still patrolling the stream. Serin even managed to get a video of this truly fascinating behaviour. You can view it at http://tinyurl.com/Xhexagonotus. To add to all the excitement, ANOTHER Malayan Brown Snake showed up. We noticed that the two serpents were swimming past each other from opposite ends of the stream, even chasing away a nearby snakehead(Channa sp.). It is possible that this is actually an example of co-operative hunting, which is not commonly observed in snakes!

I got a notification on my phone from Joelle (from the NUS Toddycats),saying that she was doing Operation No Release at Lower Peirce Reservoir. Excited, we hurried over to the other end of the boardwalk, where we met Joelle. While sh

e did not see anybody releasing anything into the reservoir, she did find out that many people were unaware of the ecological harm that releasing animals into the wild can cause. In fact, shortly after that, we actually found an American Bullfrog (Lithobates catesbeiana) sitting on the rocks at the fishing grounds. Closer inspection revealed that the left leg of the frog was severely damaged, possibly due to a predatory attack. These non-native frogs are often released (along with several other types of animals) into ponds and reservoirs as a way of receiving religious merit, or good karma. However, these frogs may out-compete local amphibian species. Such acts do more harm than good to ecosystems and even to the animals that are released, as this particular frog illustrates.

On the way back, we met a boy named Ethan, who was walking

with his father, Eugene. Young Ethan was very excited to join us on the final leg of the walk. We were worried that all the herps would have gone into hiding, but we managed to find a juvenile Green Crested Lizard (Bronchocela cristatella) for him to see. Eugene had to carry Ethan to get a better look at this pretty lizard!

In this day and age, a Singapore without Lower Peirce Reservoir may be hard to imagine. Yet, that was almost the case in 1992, when a 120 hectare plot of land in the reservoir was proposed to be turned into a golf course! A large public outcry caused the proposal to be abandoned, certainly for the better. As we have seen, Lower Peirce is home to many rare organisms (not just the herps). As long as the public appreciates this green space and takes proper care of it, we will be able to keep it for many more years to come. To end off, here is a beautiful panorama of the Reservoir, taken by Almira.