The Festival of Biodiversity is a massive annual event that brings most of the nature groups in Singapore together to spread awareness about their groups or societies and the efforts they put in to conservation. This year, it was held on the 27th and 28th of June, at Vivocity.

The Festival of Biodiversity gives green groups a chance to spread the conservation message to the general public and to enlighten them about Singapore’s nature. The HSS was proud to make our public de

but at this year’s Festival! We eagerly set up the booth with our posters and models. We also had several herp specimens on loan from the Lee Kong Chian Natural History Museum. Once our booth was all prepped, we were ready to take on the public! It was not long before the crowds started streaming in. We were thoroughly occupied, constantly on our feet and talking animatedly to the people coming to our booth.

Our fellow herper and friend Noel Thomas (far right) helped us with the setup and was kind enough to lend us some of his pictures and help us procure specimens for the booth. It was Noel who first brought us together. We were joined by Mr Joseph Koh  a.k.a. the Spiderman. He is Singapore’s foremost expert on Spiders and it was truly an honour to receive both praise and advice from him.

We met the Guest-of-Honour, Minister of State, Mr Desmond Lee. He was with former Minister, Mr S. Dhanabalan; Head of the Lee Kong Chian Natural History Museum, Professor Peter Ng; CEO of National Parks, Mr Kenneth Er; Dr Lawrence Leong and Mr Wong Tuan Wah. We were excited to talk to these important figures about herps, their conservation statuses and needs in Singapore. It was a privilege to meet these people, who play huge roles in Singapore’s nature conservation. It was a group picture that we could not resist taking.

Over the next 2 days we were swamped with huge numbers of people from all age groups, crowding around our booth. It was such a pleasure and heart-warming sight to see so many people interested in herps. A lot of people were there to seek assurance that snakes are not the misunderstood killers that they are often made out to be. We were glad to lay their fears to rest.

We were also really pleased to see many kids crowding around our booth, eager to learn more about herps by playing with model animals. We had a lot of toys and models for kids to play with. They were also fantastic for teaching the kids about herps and where they can be found.

We talked to them about how important herps in Singapore are and why we should conserve them. We were really happy to see their parents learning alongside their kids. Many of them even expressed interest in future walks with us.

Several youngsters were keen on working with wildlife and were not sure where to start learning and experiencing their passion. They were thrilled to learn that we would be organising walks. We too were ecstatic that we were inspiring future generations to continue the conservation march.

Every single one of us was caught up in entertaining the public and sharing as much as we could. Our passion and drive really shone through and it created a unique bond with everyone that stopped by. They were happy to listen to us and we were more than happy to share. We often got down on our knees just to talk to some of the youngsters and we practically stood from morning to night.

It was an amazing debut for the HSS. Like a Draco, we took a massive leap, spreading our patagium and glided for the first time. We could not have done it without the wind beneath our “wings”, that is all the people who have supported us thus far: NParks, LKCNHM and all the wonderful people at FoB, who have supported us since Day 1. A big kudos to the dedication and efforts from everyone at the booth. It was a fun and satisfying experience. The camaraderie, even between members who were meeting for the first time was amazing. We all come from different walks of life, are of different ages and differ in personality. But we stand united as one by our passion for the conservation of not just herps, but of all wildlife and their habitats. 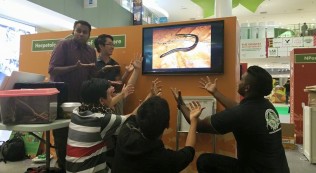 Thanks to Adriane Lee from International Coastal Cleanup Singapore, for helping us take some of these photos. Do check out their album here.